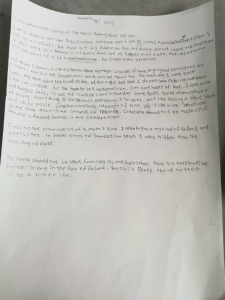 In the forest there is a white tiger called Katrina. She is a female tiger already three years old.  Her husband, Charles, is eight years old with glossy hair— a strong male tiger.

Her favorite time of the day is the morning because of how the sun slowly comes up and the sunlight shines through the leaves and branches of the trees and bounces off the water on the ground. She hears the sounds of birds, frogs, and the sound of water trickling down off the branches and the leaves hitting the stream and the ground. She sees Charles playing with Elena, the youngest girl under a tree. She met Charles hunting for the same Antelope and they fought at first over it, but they ended up sharing the meal.

One day Katrina and Charles went to hunt, but were targeted by a hunter.  When they were trying to hunt a hare the hunter shot her husband and she ran away because Katrina knew if she became immersed in sadness and not left she would be shot too. But if she died what about her children? So Katrina left. It was very hard for a single mother to live in the forest because usually the mother goes with the father together to hunt, but now Katrina had no husband so it was hard to get food to eat.

It is difficult to be a widow. It is more difficult to be a widow than with kids than a married mother with five kids. Katrina was alone taking care of five little tigers and when the tigers became bigger Katrina taught them how hunt. When they were eight years old Katrina was an old tiger already and yet the children did not leave her; they lived together. Every week the boys would bring the delicious antelope to Katrina. Their family lives happily ever after.