Today we are excited to announce our Humanities project for grades 5 and above that will be culminating in an international student film festival. The first SAIS-led Annual International Film Festival will take place during the second week in June. Schools and students from around the world are invited to share their stories through short films. In this project, students are asking themselves the following guiding questions:

Many schools around the world are still in lockdown with most not opening until next school year and this exciting project can be completed by students from home or in school and will be a powerful way to connect different cultures through the medium of film.

We are looking forward to seeing how the challenge is met from students across the globe and are excited that SAIS students will be at the center of this interesting and innovative project.

Fifth through ninth grade humanities students have been looking at what makes a strong narrative since the semester began, in anticipation of this final film project.

In February, our Upper School students were all given this picture during class. 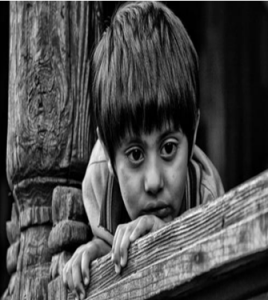 They were asked to give the boy in the picture a name and character (character), to describe the setting (time and place) and to give this person some obstacles to work through (plot). None of the students discussed what they had written with each other.  They were then asked to write a narrative. They had to add similes, metaphors and oxymorons to their stories to enrich the writing. Finally, they had to design the cover of the book.  Not just the front cover, but a back cover and the spine of the book as well.

Examples of book covers and samples from the stories: 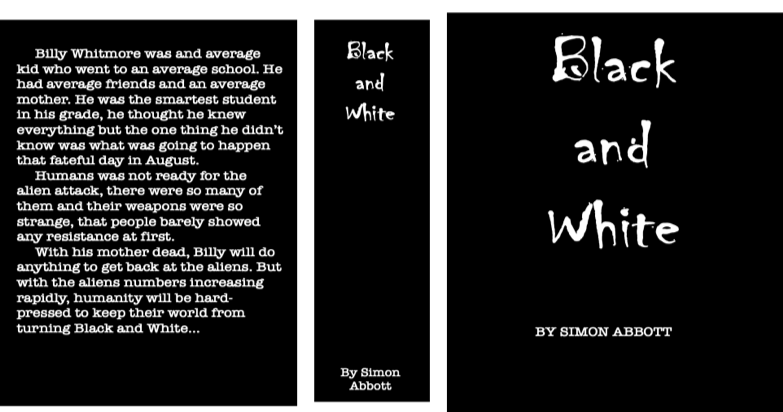 Nine-year-old Billy Whitmer was walking to school in the middle of Fall, enjoying the morning breeze, when it happened. It seemed like the sky was falling. UFO’s were flying everywhere, zapping people with their blasters. Whenever a blaster hit something or someone, they got paler and paler, until they were just black and white. After they were drained of color, they collapsed to the ground and didn’t move. Aliens ran out and attacked the fallen citizens, shooting spikes from their chests. “What in the world is happening!!!” Billy screamed.

Jasper stood in front of the graves of his parents, “Father, Mother, you guys were both great hunters. I don’t know who killed you, but I know what I need to do now.” When Jasper finished, he turned around, prepared to go back to his old house that his parents had left him. Under the house was a hidden room full of weapons, in the big long glass cabinet were a gun and a spear, both weapons were his parent’s.

A loud boom sounded in the distance as thunder warned of incoming rain. Our hero, Hagalooge, quickly set up his tent. Fearing for his life, he grabbed his bag of Cheetos and other equipment, then ran inside his tent. He knew the dangers of Chronos Woods, and the rain was no exception. Hagalooge pushed the thought out of his head and started to sort through his equipment. A camera here, a couple of lighters there, and night vision goggles drowned in his extra clothes. Nothing too special, not like the professionals anyway. He started to relax a bit, but it wouldn’t last long.

Want to read more of Black and White, J.O.H.N or Glitch – contact school for the latest in our student’s work.

Make sure you have plenty of time for these first chapters are between 2000 and 3000 words. You can see from the opening words of each story that the students have created an excitement that draws you in to read more. The work is impressive in length but more importantly in style and scope.

When Mr. Mark joined the SAIS team a few weeks into the semester, he began working with the Upper School humanities students as well. The narrative he asked them to do required that they research an endangered species and write a story from the perspective of that animal. Students are now making short films based on their stories. Here is an example from Ava’s narrative:

All of us remember the beginning. Inside the egg, it is warm and protected I didn’t want to come out. I felt around my egg and realized it was warm outside. Curious, I started to push at my shell, I felt a small crack open where I had been pushing. Exhausted, I fell asleep deciding to try again later. The next day, I successfully got out of my shell. I looked around and noticed at least one hundred other eggs. Mine had been in the front where it was cooler, so I guess that’s why I’m a girl. In the nest, we were covered from view of the outside world. I peered through the hole and was nearly blinded by the sun. I decided to wait until it went away to crawl out. “Are you coming?” Asked one turtle who had just hatched from his egg. I shook my head and watched as the turtle crawled out of the nest and padded his way across the golden sand and towards the strange shiny area. “That’s the water!” A turtle who had also been watching with me pointed towards the shiny blue water. A shadow passed over the nest before swooping down like the angel of death on the baby turtle who was eaten in one gulp by a bearded vulture. The other turtle backed further into the nest frightened by the bird, I followed deciding it was safer further away. We crawled over all the eggs to the back of the nest. “What is your name?” I asked finding a clearing where there were no eggs so we could wait till the sun left. 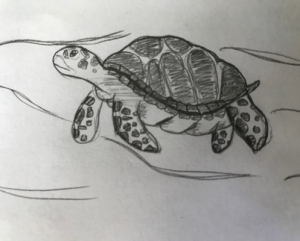 What great work and congratulations to Ms. Rene and Mr. Mark who have led this project in deepening literacy among our Upper school students.

Congratulations to our wonderful students for their great work!